Check out the winners of our Bad Kitty Display Contest!

In honor of Bad Kitty’s birthday this past May, we ran a display contest for independent bookstores and libraries. Contest entrants were asked to make a Bad Kitty-themed display. The winners received a visit from author Nick Bruel and the Bad Kitty costume, plus the funds to throw the ultimate Bad Kitty party. The runners-up for the display contest received copies of Bad Kitty books signed by Nick Bruel himself!

The entries we received blew us away!

Our thanks go out to all of the amazing bookstores, schools, and libraries who participated. Bad Kitty is honored to have been part of so many creative displays. 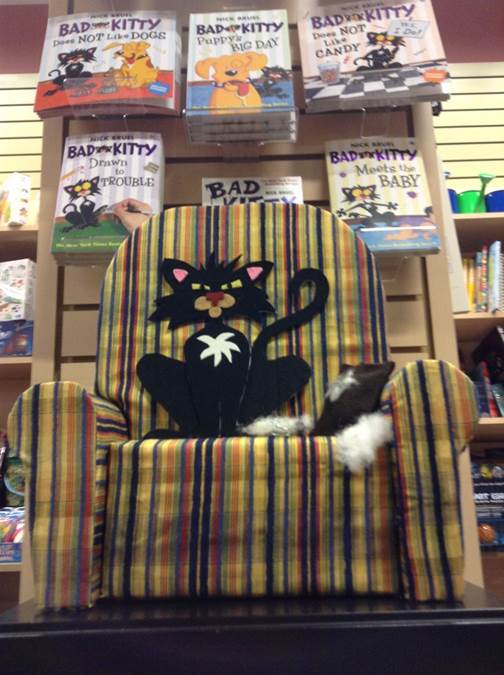 Phoenix Books really captured the essence of Bad Kitty. Like a feline queen on her throne, Kitty clearly had her way with the couch the bookstore built just for this display! Hawkins Path Elementary School showed the many faces of Bad Kitty with their display. The awesome birthday cake and nod to Nick Bruel’s picture book, A Wonderful Year, really won us over! Thanks again to all the stores and libraries who participated. Thanks for celebrating Bad Kitty’s birthday with us!